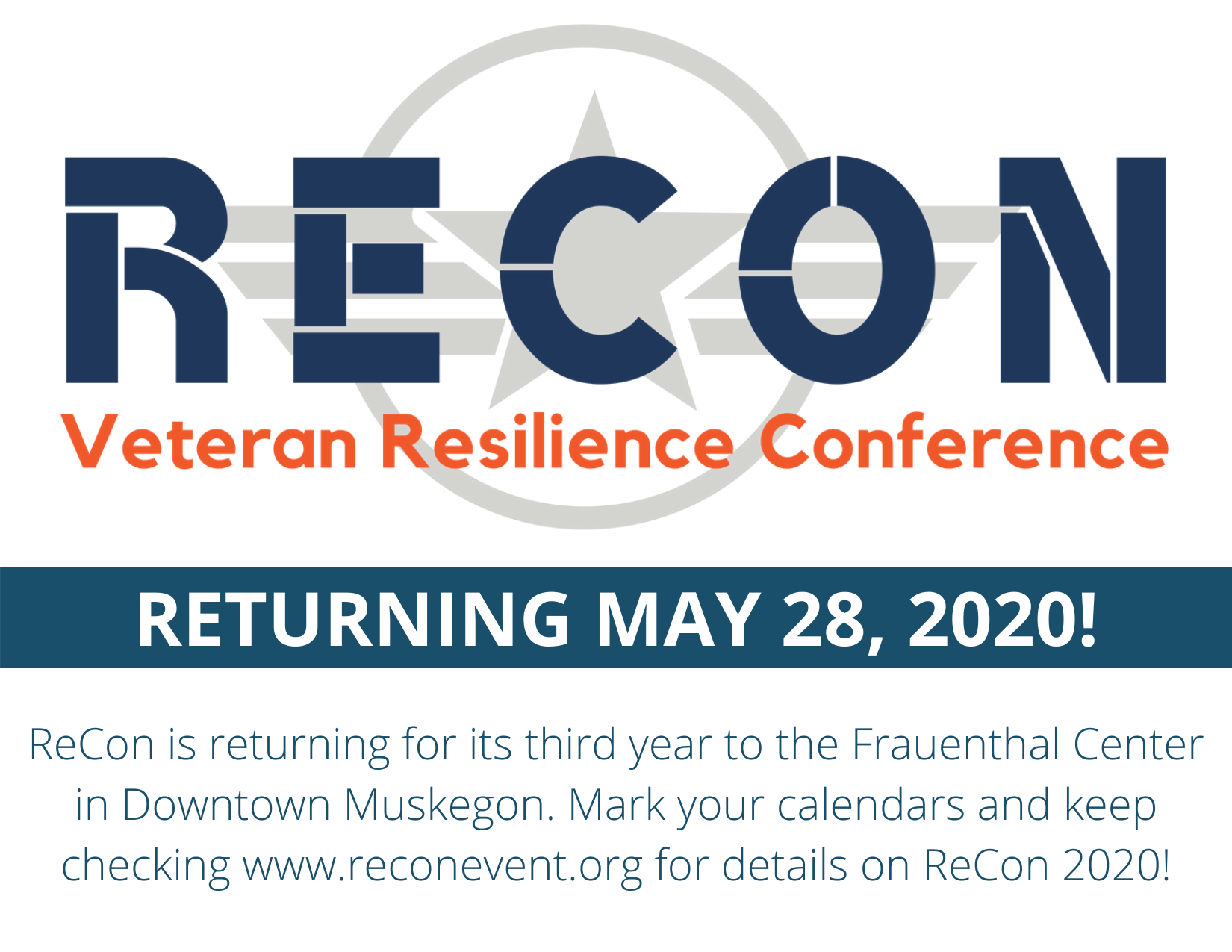 Thursday, May 28 from 7:30am – 5:00pm at the Frauenthal Center, the ReCon Veteran Resilience Conference will be returning to Downtown Muskegon for its third year of assisting military veterans, their families, and veteran service providers in developing the tools they need to lead resilient lives after leaving the military!  Resilience is one of the pillars to overcoming ongoing life challenges faced by veterans in their personal and professional post-military lives.  Resilience is not a trait that people either have or do not have.  It involves behaviors, thoughts, and actions that can be learned and developed by anyone.

The full-day conference will include keynote sessions, informative lectures, panel presentations, and resource fair.  This year’s keynote presenters include former Detroit Lions quarterback Eric Hipple and military social worker April Thompson.  Breakout sessions will include discussions on Post Traumatic Stress Disorder, suicide prevention, substance use, intimate partner violence, and more.  ReCon, which began in 2018, has grown to include participants from across Michigan and even neighboring states. Since its beginning, ReCon has drawn more than 1,300 participants.  It is organized by a team that includes mental health professionals, members of veteran service organizations, and military veterans.For more information, call Health West at 231-332-3884.

“We are excited to have two dynamic and engaging keynote presenters scheduled for this year’s conference,” said Doug Card, HealthWest’s veteran system navigator and chair of the ReCon planning committee.  “This event will provide invaluable tools to military veterans, their families, and their supporters.”  “You do not need to be a mental health professional to benefit from ReCon,” said Card. “Every participant can leave with the resources they need to face life’s obstacles head-on and develop the tools they need to live a healthier life.”

Since his 15-year-old son Jeff’s suicide, Hipple has devoted his life to building awareness and breaking down the stigma surrounding mental health. Hipple’s message of resilience has provided mental fitness awareness to professional groups, military, law enforcement, schools, communities and, through the Under the Helmet program, reached thousands of high schools and youth coaches across the country.  In conjunction with Navy’s U.S. Fleet Forces and PAC Fleet, he has provided workshops on suicide and destructive behavior prevention focusing on the Mental Fitness Program. He also established the After the Impact program, a neuro-behavioral residential treatment program serving military veterans and former NFL players.

Thompson is working as a Military Behavioral Health Social Worker with the Center for Deployment Psychology (CDP) at the Uniformed Services University in Bethesda, Maryland. In this capacity, she is responsible for the development and delivery of both live and web-based training to military and civilian behavioral health providers on deployment-related topics.  For more than 20 years, Thompson has primarily worked with military couples and families in a wide range of settings, including on bases in Virginia, Florida, Hawaii and Japan. She has expertise in couples counseling, addressing the stresses associated with military life, as well as prevention and treatment of intimate partner violence and suicide.

During ReCon, Thompson will be presenting about incorporating families into clinical care to support veteran resilience.